Biogas – a renewable fuel made from anaerobic digestion of organic wastes, which can be used to generate heat and power. Produces digestate as an output, full of plant nutrients.

Greenhouse food growing – productivity can be turbo-charged by adding year-round heat and grow lights. Produces organic wastes in the form of plant stalks and other crop residues.

Why not integrate the two technologies for the ultimate in resource-productive renewably-powered year-round circular economy food production?

This is not just a wild idea hastily scribbled on the back of a fag packet by circular economy geeks in a moment of giddy inspiration, but a business opportunity being developed at least a handful of organisations.

Lets look at the idea in a bit more detail.

Anaerobic digestion (AD) is already a bit of a dream technology for making good use of organic wastes like food wastes, manures and sewage. At its heart, a managed culture of bacteria breaks down the organic matter to produce biogas, leaving behind the residual organic matter (‘digestate’). The biogas is mostly (~60%) methane (which we can happily term ‘biomethane’) and carbon dioxide which is usually released to the atmosphere (rarely mentioned by AD enthusiasts, but we will come back to this….). Methane is what ‘natural gas’ (i.e the fossil fuel that powers most of our central heating systems in the UK) is made of, and the biomethane produced by an AD plant can be used to replace fossil natural gas with a renewable low carbon equivalent.  Most commonly, AD plants tend to burn their biomethane in an on-site generator to produce renewable electricity and heat. Some of the heat is used to keep the digester warm; the surplus is often wasted.

The digestate is generally a sloppy smelly liquid, which has value as a ‘biofertiliser’ either in its raw form, or (better) after separation into water, concentrated liquid fertiliser and a dry fibrous compost material. The plant nutrients in the biofertiliser can replace conventional mineral fertilisers including high-embodied-energy nitrogen fertilisers, and the fibre in the digestate brings a multitude of soil-building benefits in agriculture. The water content of the digestate is of value too for any irrigated crops.

Anaerobic digestion has been used for years in many countries, in large municipal sewage works and by some food processing factories, and also at a much smaller low-tech scale by households and communities in China, India and some African countries to convert human and animal waste into biogas for cooking. In the UK and many other industrialised countries, AD is also increasingly used by livestock farmers to deal with their manures and also AD plants dedicated to generating energy from collected food waste from households and businesses. Food waste AD plants tend to be more expensive, complex and bigger as they often have to deal with packaging materials contaminating the feedstock and extra processes and regulations to deal with the risk of spreading animal diseases from meat in food wastes.

(An aside – the business case for food waste AD in the UK seems to be fast changing from the waste producer paying the AD plant a ‘gate fee’ to take the waste, to the AD plant accepting the waste for free or even paying for it as a feedstock if the material has a high energy content. A good real world example of a change of perception from ‘waste’ to ‘resource’).

So, anaerobic digestion offers several resource benefits relevant to the circular economy. We might briefly consider that other approaches might trump AD in this regard: minimising food waste in the first place, using it as animal feed or as a feedstock for making commodity chemicals.

Greenhouse (or polytunnel) food growing is perhaps more familiar. A quick look at the types of growing techniques used to produce the tomatoes, peppers and lettuce we buy at the supermarkets shows us that high productivity year-round growing in Europe is achieved by:

So, putting the two technologies together, we see some rather neat symbiosis. 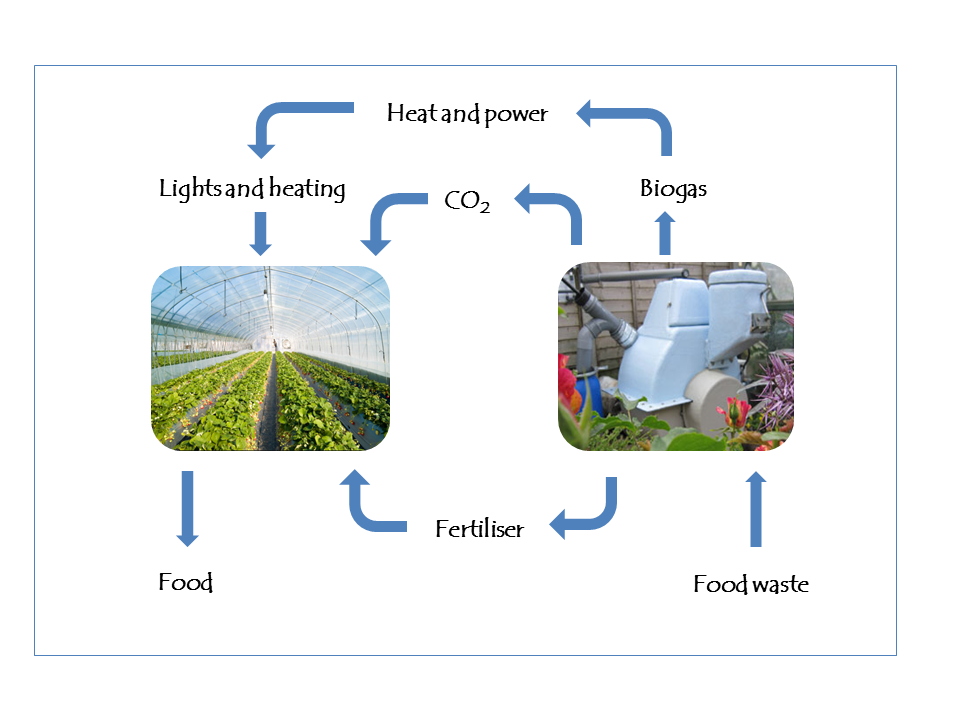 Sounds good. Looks good. Does it work in practice? Yes – at least some businesses seem to be benefitting from it and others are developing the idea further.

British Sugar know a lot about what you can do with sugar beet. Their sugar processing factory near Kings Lynn in Norfolk might be better referred to as a biorefinery, extracting an exciting range of products and energy from one main resource. The resource flows in their factory layout suggest a lot of visionary circular economy thinking at work. http://www.britishsugarlearningzone.com/how-our-factory-operates/ (paste this?)

Amongst all this resource productivity cleverness, we see that British Sugar feeds some of its processing wastes (by-products?) into an anaerobic digester whose biogas output is used, alongside fossil fuel to generate power and heat. This heat is used to warm 18 hectares of nearby greenhouses  growing tomatoes, delivered in the form of pumped hot water. At least some of the carbon dioxide in the biogas produced by the AD plant is also pumped into the greenhouses to boost the tomato growing.  It is not clear whether the electricity generated by the CHP plant is used by the tomato growers or not; it would seem likely that the sugar processing itself would make use of all the power generated by the AD. Similarly, there is no suggestion that the plant nutrients available in the digestate are used by the tomato growing: the digestate is probably more easily used as a fertiliser on the sugar beet fields. But the British Sugar system does give us an example of at least some of the synergies of integrating anaerobic digestion and greenhouse growing.

Here is another example of a large scale greenhouse – anaerobic digestion working together, this one in Canada’ ‘Greenhouse belt’: https://waste-management-world.com/a/biogas-from-ad-a-winner-for-ontario-greenhouse-grower

The LEAP project, run by Community by Design in London is pioneering the same sort of idea but at an entirely different scale. Their starting point is seeing if micro-scale anaerobic digestion can work as a solution for urban food waste, especially as a community enterprise. A quote from the Community by Design website. 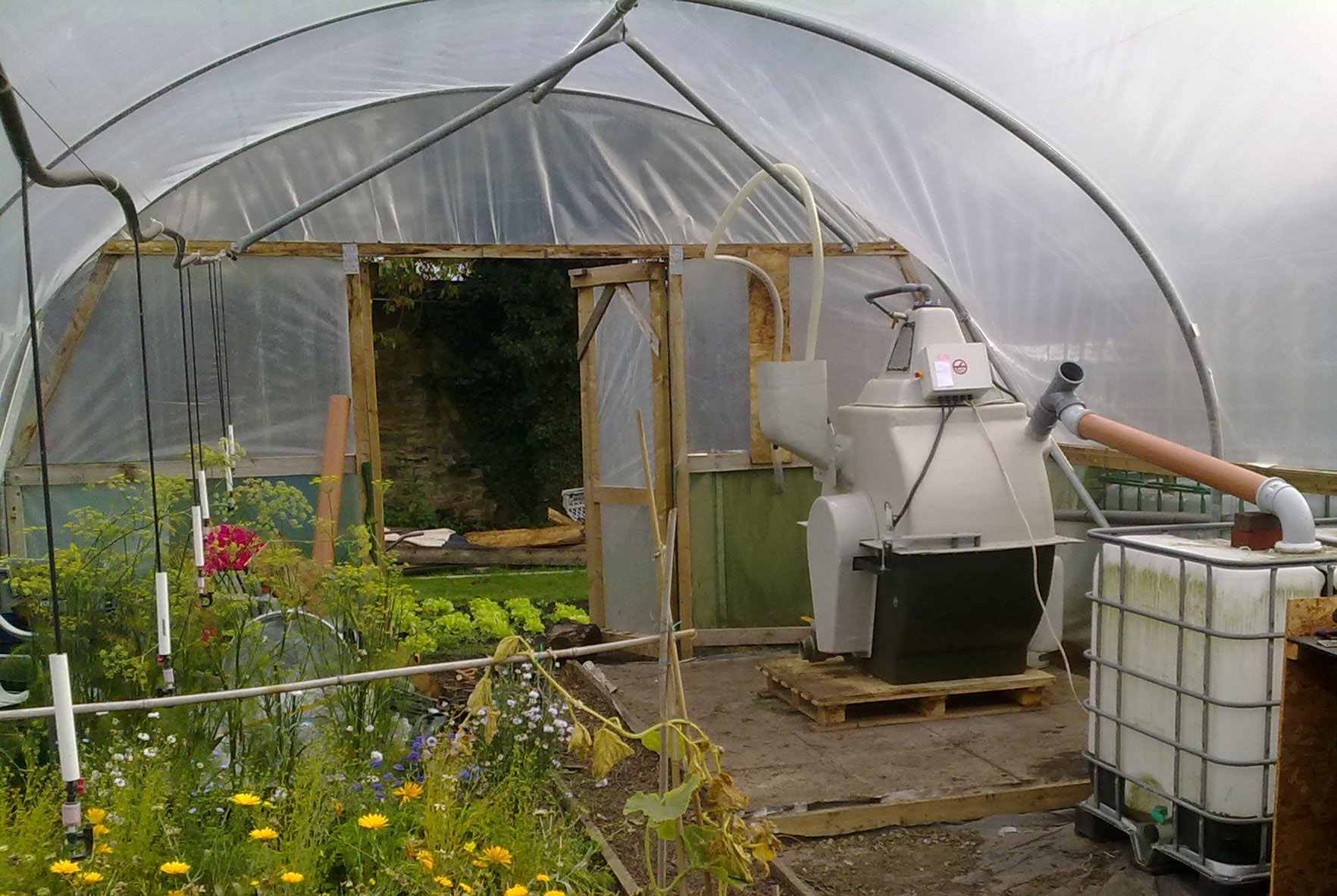 Siting the AD system in a greenhouse is an aspiration for this project (“The AD  / greenhouse combination can be a beautiful organic resource, providing fresh, local produce and serving as an educational community centre.”) which they plan to trial later this year. In the meantime, the LEAP project has already been trialling micro-AD alone, with two or three community organisations in North London, with some success. ‘Micro’ here refers to the sort of scale that would deal with the food waste produced by a café or a school canteen, around 30kg to 100kg of waste a week. A few companies supply AD equipment at this scale: the LEAP project’s main site uses a 2 cubic metre capacity digester supplied by Methanogen.

Economy of scale would seem an obvious challenge to the business case, but analysis carried out for WRAP suggested an investment payback as low as 3 years for the LEAP system. There are also a few ways that this micro-AD approach may win out over conventional large scale AD systems.  By using food waste from a small number of local sources, it is easier to minimise the contamination from packaging and so on that necessitates larger AD plants to invest in depackaging equipment. Small AD plants can also benefit from exemptions, or at least simpler regulatory requirements, from environmental permitting and animal by-products legislation. The type of AD equipment used in the LEAP project is also a lot simpler than that used in larger plants, presumably with some loss in process efficiency, but meaning the kit is a lot cheaper than it might otherwise be.

The wider vision for the LEAP project, of getting local value from all aspects of the AD operations, could also scotch many of the problems faced by large scale food waste AD businesses – especially in the case of the planned AD-Greenhouse option. Cunningly, while the biogas will be used to generate power and heat for the greenhouse in winter, in summer – when the extra heat is not needed – the biogas will instead be used for cooking in the on-site café. The café, of course also provides a nice clean regular supply of food waste as well as making use of an on-site supply of fresh food. The greenhouse growing also makes use of the carbon dioxide in the biogas, and potentially uses the digestate, a key opportunity as city-originating digestate currently has few good uses.  The LEAP project’s Rokiah Yaman tells me that the plan is to also trial the hydroponic cultivation of algae in the greenhouse, using the digestate as its nutrient source. This innovation may end up the best option, although it all hinges on finding an appropriate market for the algae.

With pioneers like British Sugar and the LEAP project leading the way, perhaps we will see the rise of the future-proof, resource-smart integrated greenhouse-biogas dream machine.